With one car in need of repairs, snow outside, and the cozy-indoors or close-to-home lifestyle that can induce, we have been voyaging in other ways these past few days.
First of all with food.

I don't know if I have shared a recipe for Poulet Coco (coconut chicken) from Mayotte before, but I made it last night and thought I would share the culinary love.  Hang tight for a "how to" and not ultra-precise measurements:

If you are not pressed for time, cut up your chicken, salt and pepper it and sprinkle with turmeric powder, then marinate it in the juice of one lemon for an hour.  I usually do not do this step and add my spices and lemon juice later.  Regarding what kind of cuts you use, that is up to you.  I do the whole bird; you can do thighs and drumsticks or just breasts. Cooking time will vary according to your choice.

Brown the chicken in a bit of oil.  After browning, remove it to a plate and sauté one diced onion, when translucent add a few cloves of garlic.  Add about four fresh diced tomatoes or a can of whole/diced tomatoes, and a bell pepper cut in strips (I often leave out the bell pepper just because I don't always have them on hand and ate plenty Poulet Coco dishes in Mayotte without).  Return chicken to pot.  Now, if you can, grate your own fresh coconut and make the milk from it, using about 2 cups/480 ml.  My next choice is to make my own coconut milk with 1 cup dried shredded coconut  (NOT THE SWEETENED kind) and 2cups/480 ml of water, which I blend in my Vitamix and then strain (doesn't have to be through a nut bag).  If you can't do either of those things, use a can of coconut milk plus a cup of water.  Season with about 1tsp of tumeric, salt, pepper, a bit of thyme, and parsley.  Cook until sauce has reduced a bit and chicken is tender. Stir in the juice of a lime or lemon, and serve over rice.  I also made a basic rougail to go with it (dice 4 tomatoes--used dried, see below, finely slice one small onion, either finely mince a nub of ginger and one small chile or use a mortar and pestle to make them into a paste.  Stir all ingredients together, add the juice of one lime and salt to taste.)

Today, I made Egyptian Ful Medames, with some distinctly seasonal compromises.  I made dried tomatoes this summer and preserved them in oil, so those stood in for fresh tomatoes, and ditto for some dehydrated cucumbers.  I also made this quick Yoghurt Flatbread (soooo good!) to go with it. However, next time I will add a touch more salt and will have to fiddle with the amount of yoghurt (I had fromage blanc on hand) because the dough was excessively sticky and hard to work with. The resulting flatbreads were incredibly pliable and had a very nice texture for a yeast-less bread. 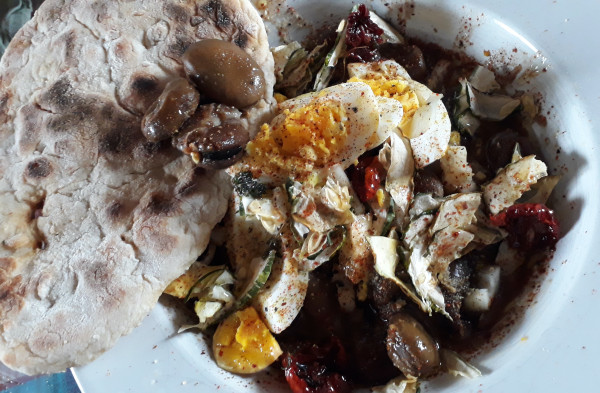 And OY!  I just realized I forgot to serve it with tahini.   Ah well, just reason enough to make it again.

And my elsewhere finale is the movie Padmaavat.  Epic, gorgeous, lush cinematography.  The landscapes, architecture and costuming were to die for.  The movie apparently (I was not privvy to this before watching, having never heard of it before stumbling across the eye-catching theatrical release poster) caused a lot of protest for various stereotypes, which I understand, one plot element being telegraphed by the disclaimer before the opening credits.  But like I said, gorgeous.  Not being a Hindi speaker, I watched a subtitled version, so I am sure there were plenty of things lost in translation.  As a Westerner, one thing I loved watching was way the male actors express their virility, like the dancing, that are foreign to the cultures I have frequented.