Two weeks ago, I blogged about a festival we attended near our home where I encountered the work of Thibault Prugne.

Not knowing what was inside, I entered a reception tent and saw this first piece hanging just to my right.

I was charmed by the scene, the perspective, the chiaroscuro. A quick glance around showed that the rest of the works exhibited were by the same artist. J, more perspicacious than I, had spotted the artist's bio posted outside, and I went back out to read up on the expo.

This photo in itself is neither good nor, perhaps, entirely important if you can't read French, but I show it to refer to something therein that might have contributed to the reaction I had to Mr. Prugne's work. 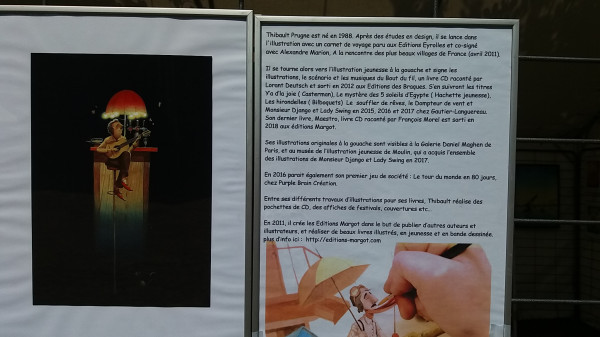 At the bottom of the bio, you see a photo of the artist in the middle of painting. Holding this image in mind of a creator at work, back I went to look at the creations themselves. And after enjoying a few pictures, notably the one below, my eyes welled up with tears. 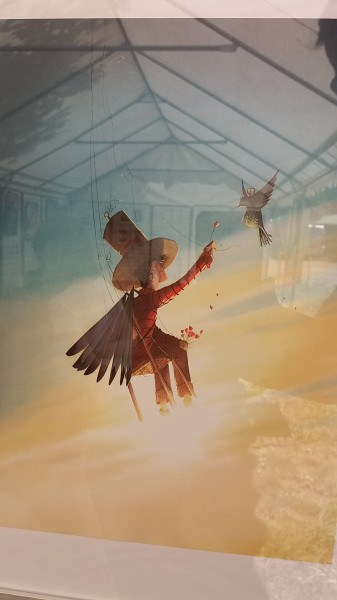 With the light reflecting off the plastic framing, creating distracting overlays of people and tent framework, it is hard to get the impact, I know, which is why I encourage you to go check Thibault's website, linked above. (I don't feel comfy posting a bunch of photos that are not mine, even if I cite the source and link back.)

And that last bit gave me my own whimsical--and definitely melancholic--gut-punch of failure to get any art done. Here was someone succeeding beautifully at living his artistic dream. Here was someone doing. Someone putting paint on paper. Even as I felt sadness at my own lack of creating, I rejoiced at seeing the fruit of someone else's labor.

I know I would never create the same way--my style and execution do not lean in the same directions, so this is not about wanting to copy another artist--but I know that if I don't practice I will never create MY best way. I will never learn and grow and improve and someday be able to illustrate my story ideas. I will never put paint on paper and get it out in the world.

So, yeah, I know I have not done Thibault Prugne's work justice but I wanted to blog about it because it was the first time in a long while that I have had an opportunity to be so moved.
Tags: art, artistic aspirations
Subscribe