Honey Harvesting and Misadventures of the Trade

Yesterday, the neighbor who told me about the local beekeeping training called to ask if I wanted to come over and watch him harvest his honey. Naturally I gathered my bee suit and went to see what I had not been able to witness during classes because of the weird and inclement weather this year has thus far shown us.

I don't have gloves yet, though, and despite smoking my hands, I got stung twice. Then BB asked if I wanted to be the one to lift out the honey-full frames and otherwise handle to the hive to get acquainted with the work. I was excited to so and felt a lot more comfortable than I thought I would given that our classes are very full and no one can monopolize a position close to the hive or do enough to master the necessary manipulations. 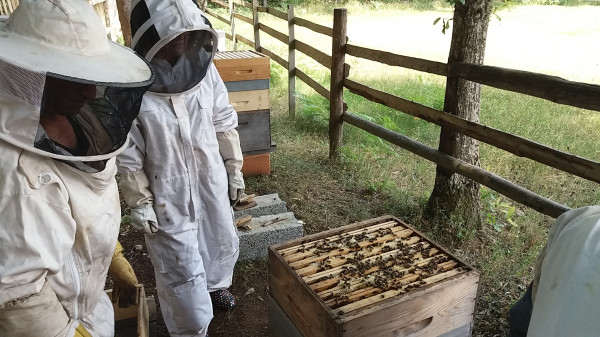 (one of BB's hives open, with an interested neighbor and BB's brother looking on)

However, for me to work in safety, BB gave me his gloves, and then he promptly got stung 6-7 times. :(

Back at his place, he taught me how to cut the wax caps off the comb and use an extractor.  His son was the first to use the extractor, turning it way too hard and breaking the comb, thereby painfully reinforcing a lesson I had been taught in my classes: Always start slow and don't try to go too fast! We harvested about 50-60 kg of honey, and I got to bring home a kilo (delicious!)

BB's brother called J and had him and the kids come over to have an aperitif with us. Sadly, we had just sat down together when O, BB's son (he turns 25 next month), got stung by a bee. And he is allergic. Given his symptoms and what I had learned from a beekeeper who has allergic family members, I told BB and his wife that they should call the paramedics. 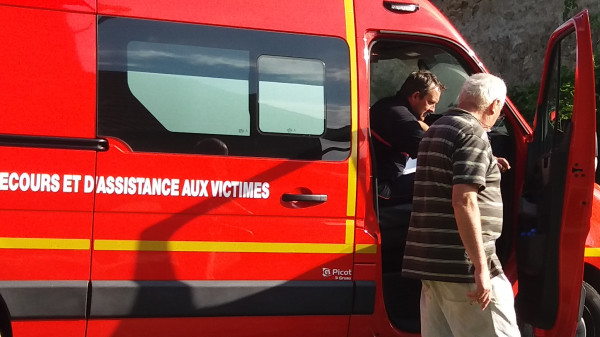 Firefighters showed up 15 minutes later and the medical rescue helicopter 5 minutes later.  They gave O a shot and ended up taking him to Clermont for observation, but he seemed to be doing better overall. 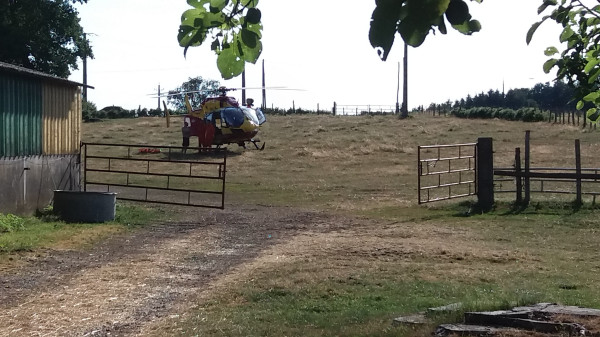 Not fun for O, but it is reassuring to know how quickly help can arrive for us out here in the boondocks.

So, beekeeping: idyllic and peaceful?