Sundry things before a Sunday

Life on the farm has been anything but quiet and restful in this normally calm(er) season, and all my plans of being more present, more organized, more on top of everything pretty much flew out the window.

We had a warm spell around Christmas, and our flock got infested with lice and red mites. Naturally, J was gone for work, so I bathed chickens, cleaned the coop, and tried different set-ups over several days to make future cleanings easier. Sadly neither the hens nor I were happy with any of the changes, and I ended up putting everything back the way it was. Much wasted effort, but let us think--or pretend if we have to--that I learned something and the extra work was good for me and the birds.

In other poultry news, we bought two ducks to replace the ones that escaped in December. I'll get a drake for them on the 12th of this month.  And possibly one more female...

And speaking of males and females, Lila, our sickly poulet, has turned into a strapping young rooster.* Bad on the one hand since I bought him to be a mother hen, good on the other because Rico has turned into a terror. He attacks everyone in the family except me. It started with Ti'Loup, and we chalked it up to him being only slightly bigger than Rico. But now he is even trying to take on J. So, into the pot he will go. We're going to keep him for about a month longer to fertilize a spring clutch, and then we'll harvest him. *sigh*

The chickens weren't the only ones attacked by parasites. A couple of weeks ago, we discovered that we had pinworms. We found this out the night before J was scheduled to take Sprout and Farmer Boy to my mil's place, the plan being for them to stay with her for 1.5 weeks to give me my first almost-kid-free break in 5 years. I was supposed to use the time to work on my children's book, which I want to send out by March 31. Instead I disinfected the house from top to bottom, only finishing all of the laundry two days before the kids' return.

The morning after they came back, we had guests come stay with us for 3 days. It was wonderful to see them, and their two kids got along famously with ours.

I don't think I mentioned that we got a puppy, but we did, back in November. His name is Banjo, and he is a Border Collie/Husky cross, with a couple other breeds thrown in. Those who know what it is like to have a puppy will know what a stupid mistake this was on my part, a total lack of judgment. I'm already responsible for so much with the house, the property, the kids, and I decided that, sure, I could add a puppy to the mix with no worries. If you haven't figured it by now, this is my first time having a dog. So I underestimated the attention they need.

We wanted to get a puppy to raise around the flock to habituate it from the get-go to the birds. In hindsight, we realize an older dog would have been a better fit. In a moment of inattention from me, Banjo discovered the thrill of chasing the chickens. He has attacked Lila** four times. I've been trying to train him thanks to advice from

frigg, and he is doing so much better:  He's quick and wants to please, but yesterday, when I was right there with him, making sure Rico didn't attack Ti'Loup, he darted off after Lightning. He immediately stopped the moment I yelled at him, but it just shows that the trust he was slowly building back is unfounded.

It makes me feel even more raw to admit it, but this has been a rough season, and I've been through some rough patches, feeling like I can never get anything done, like I make bad choices and only bad choices.  Which makes me feel worthless and frustrated. Here we are in March, and we aren't ready to plant, much less sow, yet our plan relies on us being able to feed our family a majority of food grown and raised on our own land. I know we have to be patient, but our desires and expectations leave me irked at myself for not being more on the ball.

To add a bit of salt on the wounds, J's request to do his blacksmith trainging this year was denied. We were counting on acceptance to have him around the farm more this summer to help me out. Our next hope hangs on his being transfered closer, albeit still an hour away, to home this September.

Speaking of close to home, in less-whiney news, I love the varied and fascinating cloud formations we witness living so close to the Massif Central. I've been an avid cloud admirer since my early childhood. Here is a photo I snapped with my phone while taking Sprout to her horse riding lesson; I wish I would have had my camera and could have done it justice: 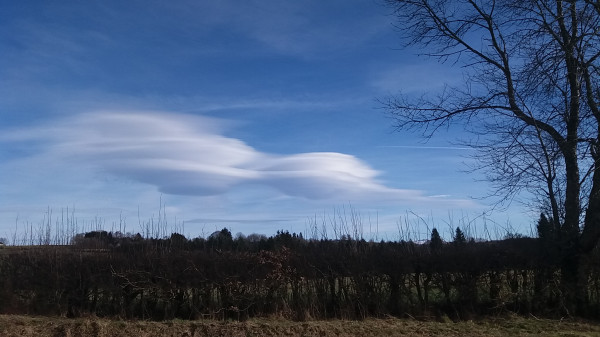 And the best news of today is that we celebrated Farmer Boy's 4th birthday. I can't believe that wonderful, loving, generous boy is already 4.

_______________
* I've suspected for a good two months at least that he was not a hen, but our neighbor kept insisting he was. Buff Orpingtons don't have flagrantly obvious sexual diamorphism, and Lila was retarded in his development because of his early sickness.

**That rooster is like a cat: nine lives. He is getting close to that final number, though; he needs to be more careful. :P
Tags: chickens, life in france, whinging
Subscribe