This is a post I first made on DW*, but I added a bit more info along with the pics.

Let’s start this catching up with baby steps. Seems easy to talk about our chickens, so I’ll begin there. Back in this post I mentioned the flock, but things have changed since then.
The day J went back to Cairo, he first made an early morning dash to a nearby farm to get two ready-to-lay hens for us. Because, you know, I was trying to get settled into a new house with three kids in another country and had just fallen down some stairs and seriously wrecked my arm. Of course I needed more things to take care of.  Remember this point of needing more to do; it comes up often. :P In all seriousness, though, we were all ready to start eating some farm-fresh eggs, fresh from our farm, that is.
Wazel Peck and Pêche are both good layers, but Pêche is certainly the star. Poor Wazel got a bad case of worms in August and is now undergoing a major moult, so her laying has been seriously sidelined. They are both typical hybrid hens, what people around here simply call « Les poules rousses. »
Pêche: 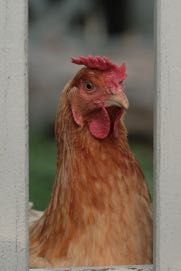 The hen on the left is Wazel Peck, when she was feeling well, next to Lila, the little Buff Orpington that I mentioned being sick: 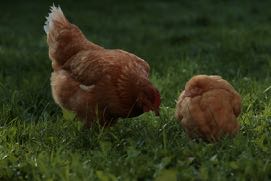 And here are Wazel Peck and Lila again, now that Wazel is moulting and Lila is back on her feet.  Yep, against the odds that everyone around here said Lila wouldn’t—couldn’t—beat, she is mended and doing great. She convalesced in the house for over a month, and I doctored her with elderberries, self-heal, comfrey, nettles,** propolis, and thyme and clove essential oils. When she got a sinus infection, I gave her injections of Tylon, or however it is spelled. 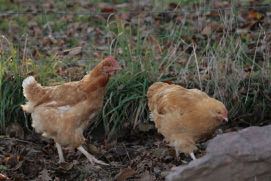 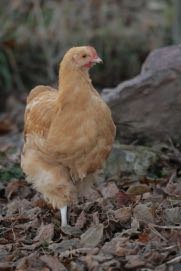 This is « my » hen, Winona, a Wyandotte, who is still with us even after being attacked by something, possibly a hawk. Not only do I think Wyandottes are beautiful, the race has a lot of characteristics that made me choose her, like being known for being good mothers. We hope to hatch our own chicks come spring to supplement some day-olds that we'll buy for meat birds: 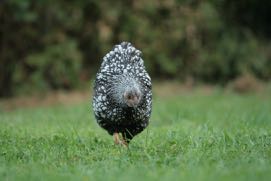 Sprout’s other hen, Lightning, a Gournay, who is now helping Pêche keep us in eggs. Some people believe that the Gournay line has roots in chickens brought to France by the Vikings: 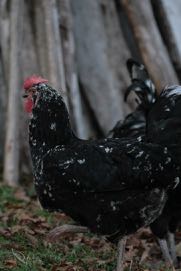 Cot-Cot, Ti’Loup’s Bourbonnaise. This is an old photo; her crest is quite big now and I think she’ll be the next one to come into lay. She is also a hen that I really like. Similar to Lila, she is very energetic and a real go-getter. Not skittish, very curious, and a fantastic forager: 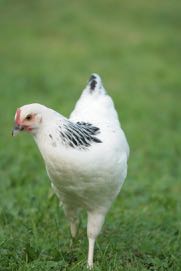 And an earlier photo alongside a current one of our Noire de Berry rooster, Rico. I wish I had a picture of him before he got attacked by our neighbor’s dog the other day. His tail was quite magnificent. We’re just happy he is still with us and that I went outside in time when I  heard all the ruckus. 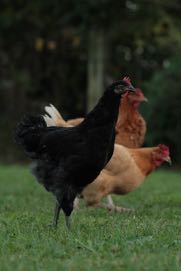 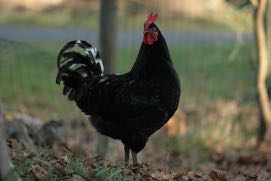 After Wazel has her first spell of not laying and Lila being at death’s door, I asked the breeder from whom we bought the majority of our flock if she had any hens that were ready to lay because one egg a day was not cutting it. She sold us Storm, a Coucou Malines Tête de Dindon (turkey head). That was over two months ago, and we are still waiting on an egg from her. :-/ When, after a month of waiting, we half-jokingly asked the breeder if she mistakenly sold us a rooster, she said, « She has to lay one of these days." Color me irritated. 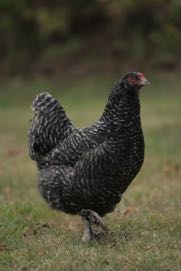 ** On a couple of blogs and forums, I’ve read people in the States saying that elderberry and nettles are poisonous for chickens. Why is that? Chickens in France are regularly fed nettles, which are excellent on the nutrition front, a real superfood. Our chickens wouldn’t touch unripe elderberries, but once the berries were ripe, the chickens loved them, and I firmly believe they played an integral part in Lila’s healing.
Tags: chickens, life in france
Subscribe