Sunday Snippet for the the last, what? month? two, three months?

Or shall we just call it, "The State of Things." Forgive me, LJ, for it has been awhile since my last post.

_________
I've never tried to put a cut under a cut, so be warned that when I say something vile happened, there should be an additional cut there to keep it out of public view unless you want to read it. If there is not a cut, don't read on, there's nothing more to see. :)
________

I feel like I've been living in a whirlwind, a whirlwind that sets me down every once in a while for a too brief spell and then snatches me to spin me around again.

When we went back to France this summer, we found a farm that had a lot of potential, but the project appeared out of our budget. Still, the agent told us to make an offer. Before doing that, we wanted to get estimates from tradespeople.  So I spent the better part of a week drawing up blueprints for the job. Then the waiting game began. Turns out someone else made an offer on the place, and the agent didn't bother to tell us until we contacted him for news. Not nice.

So the house hunt is still on. We'll go back to France just after Christmas for one last break there before our time in Egypt is done; this will be our last chance to find a place before we move back. We really, really want to find something beforehand for multiple reasons: one less move, no rent, stability for the kids, ability to get projects underway...

During all that and for a week or so afterwards, I made a lot of progress on sketching for my picture book. I was feeling really good about it, but then came time for Sprout's sixth birthday. Before I got totally immersed in that, though, we went for a night of camping with friends in Wadi Degla. Three families with ten kids all under the age of 9. Fun times indeed. We shared a tent with one of the families, and all their kids were sick. So we got the crud, naturally.

That along with the need (want, I should say) to prepare an elaborate party pretty much stopped cold my work on the book. I didn't mind. This will be the last birthday Sprout celebrates in Egypt, and I wanted her to have a memorable one with all of her friends. Twenty-two kids showed up, not counting the ones too young to play the games, so it was a big production. I'll make a different post about all that.

Poor Julien's birthday, two days after Sprout's, went by with hardly a blip. I took the kids out of the house so that he could work on his blacksmithing all day, and we ate leftover birthday cake from  Sprout's party.  I'll make it up to him one of these days...years. And on that day we also celebrated (acknowledged, rather) our four-year anniversary in Egypt. Nine months to go...well, 8.5 now. I don't think a "who's counting" joke is going to fly at this point. :P

I also decided to participate in NaNo this year. Not enough on my plate and all that. Seriously, though, I feel like writing and am pretty sure that life is not going to let me sink into one of my epic novels at this point, so I decided to work on a Middle Grade fantasy fiction idea. I'm 22K in at this point and am hoping to wrap it up at 50k, just perfect for NaNo.

I volunteered to be the costume designer for our church's Christmas pageant this year. It is a pretty cool pageant because we meet under a tent and get to have live camels, sheep, and a donkey.

I've also done some sewing for a birthday present for a 4 yr old boy, a reversible superhero/knight cape and a mask from a repurposed sleep mask, courtesy of some airline for making us miss a connecting flight. The models were suitably impressed and want capes of their own. I think I know what I'll be working on for Christmas. I riffed off this pattern/tutorial, making adjustments since I was using scraps and didn't have enough fabric. 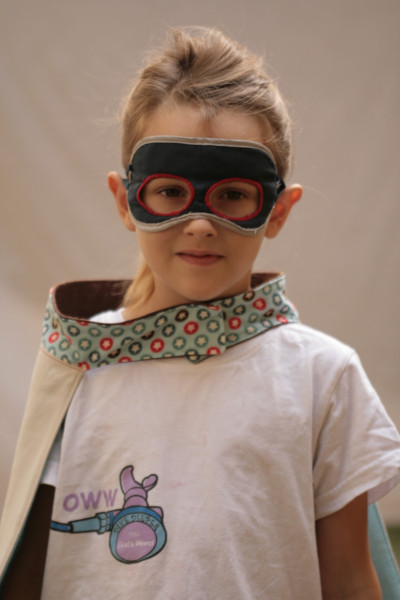 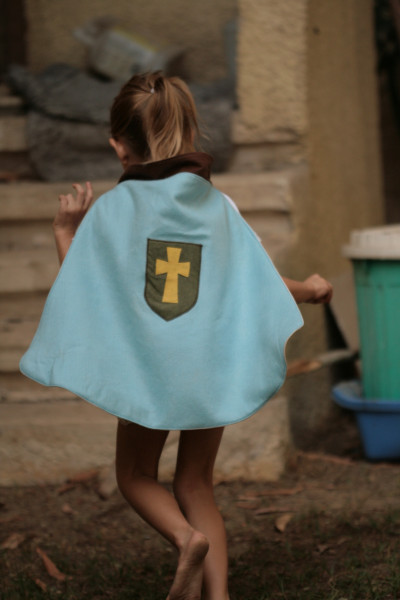 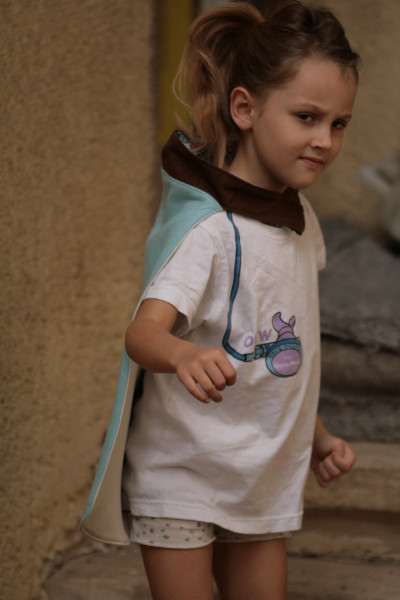 Just call him The Flash(er). :P
I think my kids will wear clothes more often in France. Maybe.
Oh, and I'm taking a Leadership Training course on Sunday nights. Next week is the last of the eight weeks. Winding down just in time for Thanksgiving. Which I feel like I should celebrate in a "big" way this year, meaning have some people over because this is going to be my last chance to have the holiday with fellow Americans. I've invited French people to celebrate before, and it just isn't the same when the holiday means nothing to someone.

I'm trying to stay positive about the upcoming season and the time that remains to us here in Egypt, but the "Egyptian" side of things is really getting to me. The pollution is always horrible this time of year, and we can't be outside in the morning or open the house because of it. And I had another vile thing happen the other day.

I was playing with the kids in the green "park" that fronts our house when a guy stopped and proceeded to watch us while jerking off. He made sure to get my attention at the crucial moment, at which point I became aware of what he was doing. Filthy pig. Then he casually cleaned himself off and moseyed on his way.

More than this being a problem in and of itself, he was driving the kind of motorized cargo tricycle of the guys who patrol the neighborhood looking for and buying castoffs. So he is likely to be around here again. For the moment, he might not know where we live. And now that the sun is getting lower in the sky, I need to put laundry on our front balcony to dry. It makes me livid that I'm nervous and suspicious every time I step out of my own house.

The icing on the cake is that each time I drive the scooter anywhere on my own, I always get catcalls and kisses. Tonight, one idiot was dangerously flashing his headlights at me to get my attention before finally coming up beside me on his own scooter to smack his lips and make some comment that I'm probably better off not having understood.