Junebug is 3 months and two days old.  On June 3, he rolled over on his tummy all by himself.  He also rolled off his Montessori bed. Good thing it is very low and there is a nice, thick rug to cushion him.

Today, J and Sprout brought home croissants and pains au chocolat from the bakery, and we picnicked at a freshly renovated garden spot* just down the street. After breakfast, I traversed the slackline for the first time. I started trying about a month ago and did all right my first session. My second time, I almost made it across. However, the third time I hurt myself (I think I broke a toe), and that made me leery and unable to train for awhile. Here's hoping I can keep practicing so I can surprise my BIL when we return to France in 2 weeks; he is the one who turned J on to slacklining in the first place. He has no idea that I've started doing it, but he has always maintained that he thinks I'll be good at it since I have a good sense of balance.

And speaking of balance, Sprout has a cool word. I don't think she realizes her "mistake," but it makes perfect sense when one thinks about it. Instead of saying "equilibrist" or "escalade," she combines them into "escalibrist," which is what she is. (She says it in French and English but always with a French accent.) 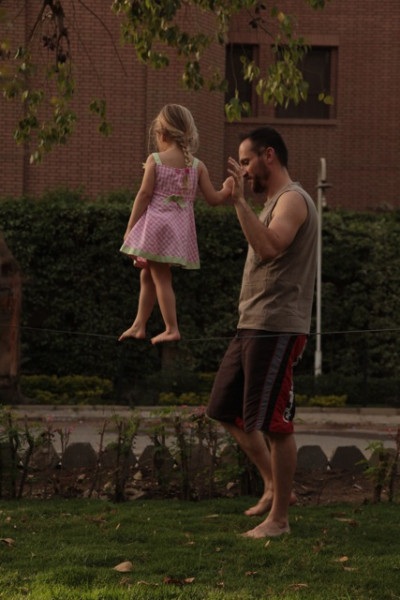 ____________
* The "garden" is actually a small triangle of land formed by the intersections of three roads. It was an abandoned, overgrown, litter-filled lot when we moved here, but the inhabitants of the apartment building that fronts it grew tired of the unruly mess. Knowing the government or "city" wasn't going to get around to doing anything with it, they cleared, cleaned, replanted, and keep it watered with money from their own pockets. They are generous enough not to complain when our little family debarks for slacklining and running around in the grass.
Tags: egypt, family, junebug, milestones, sprout, the things i do
Subscribe