This week, I did some sewing. J and I made a mosquito net for our bed, using curtains from Ikea. I haven't taken a pic of it, but it is roughly like this.

My second sewing project was a shirt for myself, using this tutorial. It doesn't look perfect, but it looks nice enough that I wore it to a party on Thursday night. Sorry, no pics. Maybe another day.

As for art, I worked on the doodle-scribble thing I mentioned last week, coloring in some of the sections. This playful experiment was inspired by this* and this on Colossal.

I got a piece of 16.5" X 23.4" drawing paper, took a Micron pen in each hand, closed my eyes and rested my forehead on a floor mat and drew, trying to move my hands in a symmetrical manner. 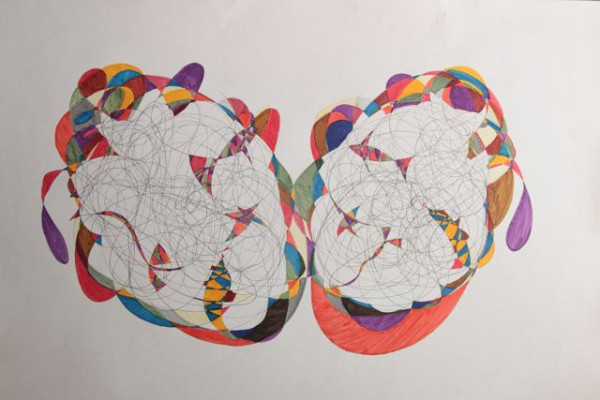 Two things to note: First, which is really highlighted by the coloring-in, my attempt was not very symmetrical at all. :P Sometimes I could feel this, sometimes not. Second, with my eyes closed and hands drawing "above" my head, I really had no idea how big and ample my scribbles were. I thought I was going to run off the page, but the actual drawing is much smaller than the space I had to work with.

I had initially thought to color in all of the sections, but, again, two things to note... :P
First, I was getting a bit bored by the time consuming aspect of it. I found it irksome rather than relaxing, working to get the symmetry right on something asymmetrical, as evinced in my break from accuracy in coloring sections that are not mirror opposites (those long, "wormy" bits to the left of the alternating blue and yellow). Second, I like how my vision of the black lines changes and different shapes and patterns emerge, depending on the angle I take when looking at the doodle; color breaks up that flow. The photo below does not do justice to the effect the eye sees. 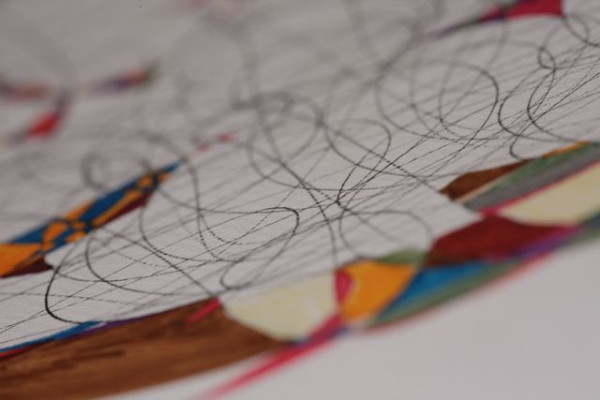 ________________
* I really wanted to something similar while pregnant with Junebug but never got around to making time and finding big enough paper.
Tags: art, click it, feeling crafty, snippet sunday
Subscribe