Wow, took me a long time to complete a simple (simplish) idea! But I did pick a detail-heavy style even if it is in the naïve, folk art tradition.

I don't know if I'll do anything artsy this coming week since we are flying out Friday.*  But there will be packing and cleaning. Lots of cleaning... 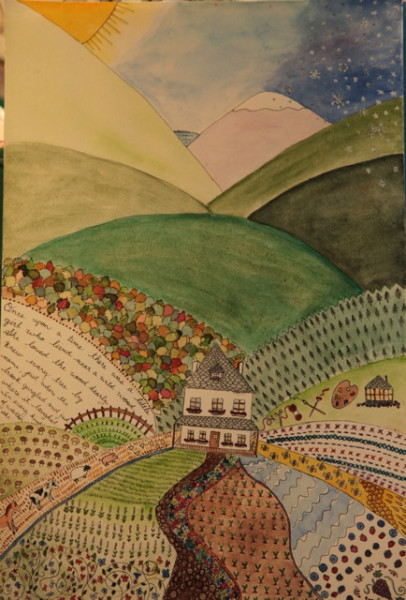 Julien looked at it, before I was finished, and said, "So, you miss green, eh?"
I guess it is a bit obvious. :P

I want it to be obvious too, however, that I want to live in a place with the four seasons that I grew up with, hence the snow on the top right and the wood full of color-changing trees on the left. I'm tired of wet/dry seasons places and hot/hotter places.

What else would I like?
- a garden and berry patch
- beehives
- a lawn, but not too much. I want some cultivated flowers, but I need some wild space as well.
- some flat(ish) land but also some hills. I spent a lot of my life on the plains and I don't really want to go back to that.
- water, running preferably, but a natural swimming pool or a pond would work, too.
- animals for companionship, milk, meat, eggs...
- an atelier, separate from the house if possible, where I can paint, do handiwork, and grow my stories.
- a forest
- space. No chance of a housing development or some such popping up next door.

Pluses would be:
- not far from the ocean (a glimpse of it from the property would suit J down to the ground)
- See those tiles on the house and atelier? I would dearly love to have a dragon-scale tiled roof,** like can be found in the Cantal region of France. *LOVE*
- I always wanted a wrap-around porch, but that is not a common architectural feature in France.  It would cut down on letting in winter light.

______________
* To get around the potentially dangerous driving-during-curfew, we are going to rent a hotel room not far from the airport Thursday night. We'll spend Thursday afternoon at the pool there, having a good last "family day" before Sprout and I are separated from J. :)