Some more pics, though come to think of it, I don't know why I don't have any pics of zebus or goats yet.  They are all over the place.  Some of the goats are tied in the public greens, but most run around like errant dogs.

No, that is not some funky fruit hanging from the branches.  Those are bats.  Bats with a 3-4 foot wingspan, at least.  On one website, I saw that they can measure 1.5m.

Unfortunately, this is the best picture I have of the whale safari.

mana_trini has some better shots from the camcorder, and I'll think he'll do a montage soon. 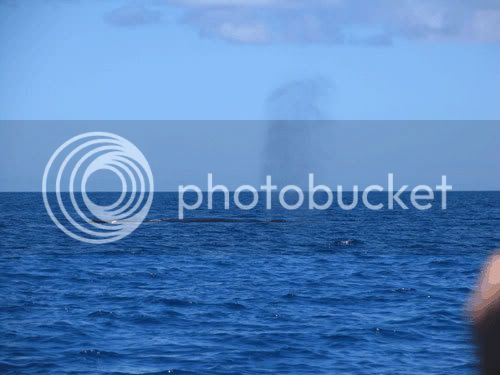 This is a tjicjac; the first gecko I saw in our house:

A Comorien skink on our back terrace:

A nocturnal gecko.  They come out to chase bugs and are in turn chased by our cats. :(  They aren't the cutest geckos, but they are the largest variety.  They get up to 17cm, I think.

This is the first squid we ate.  It was really bizarre to see it pulsing colors as it lay dead on the kitchen counter.  Did you know that you have to beat squid with a stick before cooking it to tenderize it?  You can also cook it with unripe papaya or lemoned water.

The nephile or golden web spider I told you about.  The one on the left is the female, and the rightmost is the male.

A nice little millipede climbing along the terrace wall.  I liked to play with millepedes when I was a child, but boy, do they stink.

And makis!  I saw these on my b-day, and even touched them.  I'm not posting the pic where I look like a big 'fraidy cat when I attempted to pet the first one.  You can't tell from the pics, but their bodies are about the size of 6-8 month old kittens. 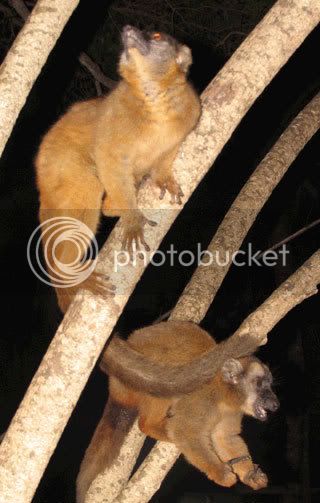 This is a mangrove crab.  It can weigh up to 2kg, I think.  Haven't eaten one yet, but they are supposed to be delicious.