Sitting on the balcony, having breakfast, I watch people come and go on the street below. The air is cool, and the dusty eucalypts are blurred by a typical morning haze. In the distance, rising above the other street noise, comes the call of "Békia!" Pretty soon, I can hear the click of a bicycle chain, and out from beneath the canopy of flamboyant trees, the cart of a cargo tricycle appears, empty. The tricycle is being pushed, instead of ridden, by a mustached man in stained, baggy clothes that are the exact same greens as the dust-caked flamboyant leaves and the same dark browns as the damp, dirty tarmac.

He spies a red five-liter jug discarded in the gutter. After checking it for holes, he tosses in the cart and trundles his tricycle down the road, repeating his calls at regular intervals.

We live at a star-shaped crossroads, and the man reappears later, coming from a different direction, going of in another, his call for broken things, unwanted things, any things at all, echoing throughout the neighborhood

In the afternoon, comes another "Békia;" but the accent placed a little differently, a syllable held a little longer, lets me know it is someone else.  Soëlie repeats after the man, saying, "Hékia! Hékia!"** as she leans against the balcony bars.  Soon, the long gray ears of a work-worn donkey peek out from under the tree foliage. This man has had more luck. Or worse, if he has been going at it all day and only has a ratty blanket and an old toilet to show for it. 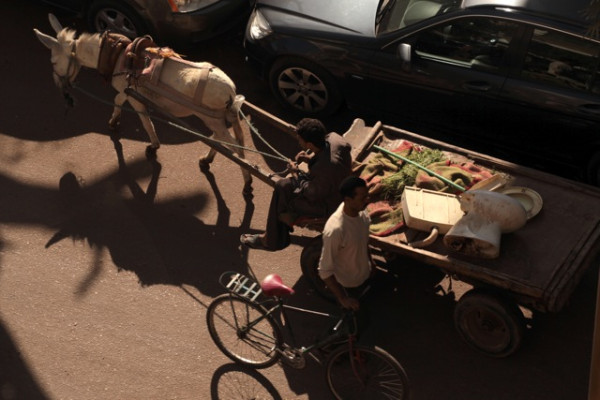 * I don't know how the word is actually spelled.

**We first thought they were saying "hékia," and so that is what we would repeat around the house. "Hékia" reference, for us, comes from a song sung in an awesome video about how all noise is rhythm.  I'll have to ask J the name of the video and see if I can't find something to link to.

ETA:  The video is "Filo; There is no movement without rhythm"