asakiyume. And because I meant to speak a bit more about the note cards, but it was after 2 a.m. when I made my previous, already-extremely-long post (in other words: not enough functioning brain cells).

I like to make lists. However, I've found making lists for scenes1 on a sheet of paper, in a notebook, or in a word processing file is not very practical, especially not when one is writing a three-volume2 story with five different POV characters. I like to use the corkboard feature in Scrivener (card graphics below taken from Scrivener) but only after I've drafted out "real" cards.  For composing, I work best (solely) on the computer, but for brainstorming, nothing beats scrawling out ideas longhand. YMMV.

Ideally, I would use color-coded cards from the outset to see better at a glance how many scenes (and their placement3), but back when I first bought some, I could only find white.  Because I don't like to waste* and I'm not ready to commit to any one idea just yet, I do my first brainstorming session in pencil. If working with color, it isn't necessary, but if using white cards, I write the POV's name at the top and then write something really basic like this: 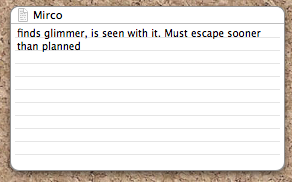 This is the sort of thing I allow myself to write down.  It is just a hint of what I need to accomplish, but it is actually one of the more "developed" cards. Mirco has to escape; an escape can't just "happen," so I have my next idea for a card: 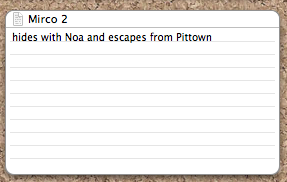 And on and on I go, letting ideas spill out, shoving the finished card aside and writing the next without stopping to judge my ideas. The whole "without judgement" aspect would not be possible if I tried to write complete scene synopses right out of the gate.

Sometimes I have to stop and think about what could/should happen next.  Sometimes I realize I have to backtrack and set something up. Sometimes inspiration for the end flashes into my mind. And sometimes, an idea for another character occurs to me.  I just write it down on another card and go with it, moving from character to character until I have the basic story down. I shuffle the ideas into more or less chronological order by character.

Then--and this is where it helps to have a dedicated space, like my ghetto "cork"boards (especially if you have small children or pets4)--I start pinning up the cards, first by character to make sure I have a complete arc. Oftentimes I know at the outset I don't have a complete arc because two POVs are in the same place/scene somewhere in the story, and I haven't decided through whose eyes we'll be seeing the action. (This is where I am now in the re-plotting process.)

Next I start moving the cards to weave the story lines together, paying attention to chronology and reveals,  a challenging task with multiple POVs on different landmasses. I often discover I need additional scenes or that I can cut things because I've either repeated myself or because cards/ideas can be combined.

Once I'm happy with what I have, I start  will start filling in my color-coded cards, making sure to flesh out each white-card entry into a full scene synopsis, complete with character goal and stakes.

I drafted volume one of Witherwilds using just the white cards, as in the images above, and sadly, I find myself with a lot of scenes that aren't carrying their weight. I'm writing epic fantasy and because of the story expectations that genre carries those scenes need to accomplish more. Different genres promise readers different things, so my worries over my scenes are not going to be the same as someone writing, say, romance.

As I said before, I won't necessarily use white cards before colored on my next book, but I will brainstorm in pencil first so I can erase and reuse them to flesh out the initial kernel.  I really don't like wasting. :P

asakiyume, each card is a scene. But they don't start out that way. Since I'm replotting the books now, I am redoing the cards for book one, already written. It has helped me to see that some scenes are not clear on goal, conflict, introduction of new information, or change. You can use cards at any point in the writing process, I think.

1I use the word "scene" loosely here, denoting any cool, necessary, or interesting tidbit I want to include in my book.

2I actually don't like saying I am writing a trilogy because I am not telling a story that breaks down into three separate books, each having its own independent "story" to neatly tie up at "The End."

3This way it is easy to see how long you've been neglecting a character or if you have five scenes in a row from the same POV. It all depends on the story, but I don't necessarily like following a strict order of A, B, C, A, B, C, A, B, C...

khiemtran, I'm anxious to recycle these cards for my Arabic alphabet. :P