Muddling my way through process

First things first: This is by no means a how-to or "lesson." This is me rambling about story structure and process because I keep promising to show what I've been up to with my writing. If this navel-gazing brain picking can be of use or interest to anyone else so much the better.

I do believe there is truth in that, but I would like to nail down a basic process that will give me consistently good results, translate: that will give me a decent first draft that does not require me to start over fifty times before ever once typing "The End."

When I talk about starting over, it is not to polish. Nay, I only did that when I was a wee young writer. Now I start over when I realize, "Hey, forgot that dratted conflict again!" Or, "Hey, didn't I resolve to include things like goals and stakes? Whatever happened to those?" Unfortunately, that happens way. too. often.

I want to be a panster, someone who can just pound out a draft, following that little white plot bunny down myriad rabbit holes in search of Story, trusting a "great" book will come out of it. I get lost in the warren, though, unable to find my way out, as my sole completed (and broken) book will tell you.

I want to be an outliner. Oh how I envy people who have the discipline to actually think things through and come up with a game plan before chasing willy-nilly after lagomorphs. But those dratted floppy-eared fluff balls are so inticing I'm off trying to catch one before I even realize it, organization and blueprints be hanged.

Yes, that is the crux of it. When it comes down to it, all my outlining attempts only get me so far before I break and just start drafting. Many times I can blame this on a fear of writing formula fiction. Let me clarify something. When I talk of outlining my fiction, I mean consciously trying to make sure certain elements are present, like the components of the Three Act Structure or The Hero's Journey. I don't like Freytag's Pyramid, the typical diagram used to illustrate the rising and falling action to the climax and denouement of the Three Act Structure. It doesn't make sense to this peabrain. And anything that resembles a checklist (The Hero's Journey) is bound to produce hackneyed, formulaic fiction, no?

Well, no. But I have (had?) a hard time accepting that. So, I set out to learn more about story structure and how to overcome the problem I have with writing conflict-filled tales that readers can't put down.

I ended up on a site called Storyfix, which I've linked to before, I believe. In the series called Story Structure, Larry Brooks says that in learning about story structure, which is a subset of story architecture, "[...] you’ll learn what to write and where to put it in the sequence of your story."

After I stopped twitching over the "what to write," I thought about architecture and how, apart from cookie-cutter suburbia--OK, surburbia is not the only guilty party--buildings can be so vastly different even though they all have the same basic components like windows, doors, walls; and yeah, I started feeling a bit better about the whole structure thing.

I read Mr. Brooks' whole series (took me several days) and came across something that clicked for me. I'm a visual learner, and while there was no diagram, Mr Brooks' comparison of story structure to a circus tent really hit a chord with me. Planning out my story in terms of tent poles made perfect sense to me, whereas the W storyboard method (links to a YouTube video) and the previously mentioned Freytag's Pyramid just don't have the same resonance for me. Doesn't mean, of course, that they don't resonate for others.

I drew myself a little diagram, which I posted before, to help me keep the structure in mind: 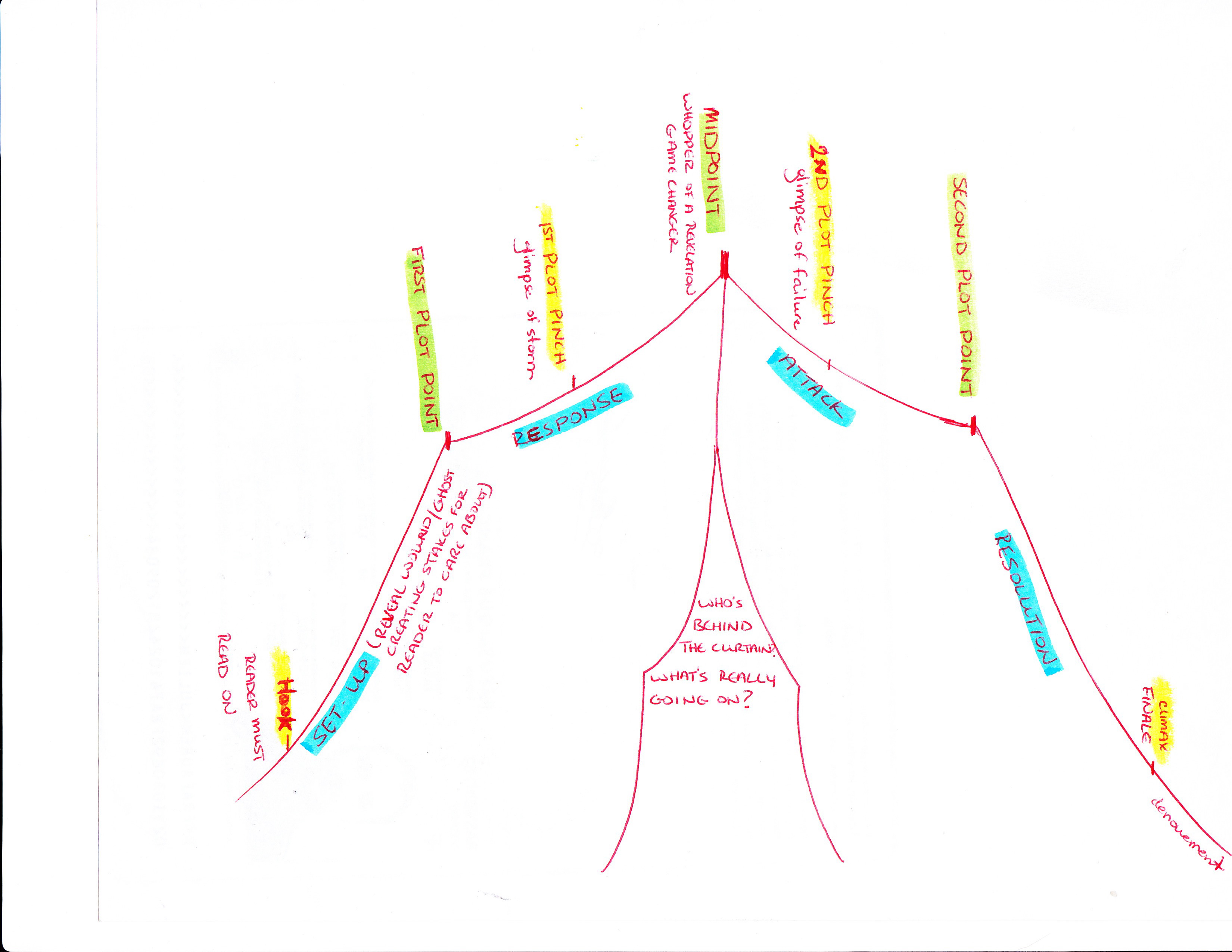 (clicking takes you to a larger photo if you want to read my messy handwriting ::cough::

I still don't claim to be comfortable (ie to have mastered) all the turns and pinches and points that are needed to support this circus novel I'm writing, but I have mapped out some of them for some one of the POVs. OK, I confess, I haven't been able to do this yet. But I will. I will.

I will thanks to the next step in my nefarious book-plotting activities: note cards.

I've used this method before for scene writing based on advice by Holly Lisle, and it worked so-so for me. It allowed me to get scenes down in an easy-to-move-about format, vital for writing a trilogy with five POVs. Why it previously didn't work perfectly for me is because of my laziness the aforementioned war between my pantsing vs outling selves. I wrote down snippets of what needed to happen but I stopped before I included a character goal, stakes, a complication... I ended up with lots of scenes that don't have any dramatic tension.

This time I decided I would do things differently. I would draft out preliminary cards (what Mary Carroll Moore calls "islands" in that video I linked to above) and then I would use my fancy hole-punched color-coded-by-POV cards to write official scene cards.  That allowed me to write quickly and in the moment, getting down a logical flow of action and reaction without stopping to think, "Now, what are the stakes here? Who will provide opposition?" It is just like by-the-pants drafting but in a very bare-bones way.

I then snagged some large sheets of cardboard from my local health food store's recycling pile and taped them to the dining room wall. I pinned up the cards by POV.

I have more cards than this now, but I'm probably still missing a few scenes. Some of the POVs overlap here and there, and I have yet to decide what will be shown by which POV.

Below are my fancy cards, and after I have them filled out and put them in the correct order I'll be able to keep them my binder, making my story structure portable and freeing the wall of my mess. 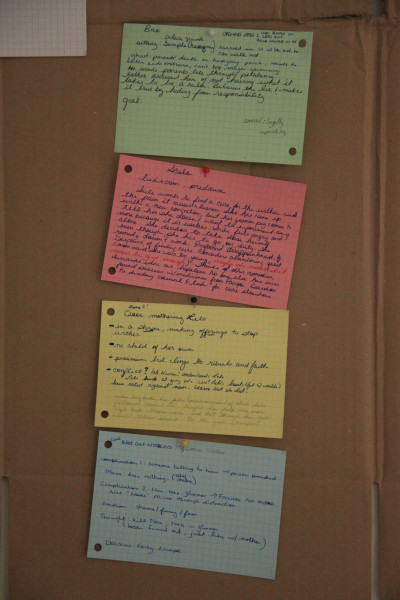 On a scene structure level, I will be using the Scene and Sequel method lauded by Rangy Ingermanson.  On one side of the card (with the holes on the right side), I'm writing down things like "setting: _____," "goal: _____," "disaster: _____-," etc. to make sure I have the basics. Once they are all in place and I feel good about what I have, I turn the card over and write the scene summary in paragraph form using this template (I couldn't find the webpage I took this wording from; I wrote it out on a tattered piece of paper years ago):

Character has a goal and, while pursuing it, encounters conflict. The conflict ends in disaster, which prevents him from reaching the goal. The character reacts to the disaster (mentally, emotionally, or physically), which forces him into a dilemma: Does he do X or Y to continue trying to reach his goal? He decides on a course (which starts the process over again).

Example from the pink card above:
Srila wants to find a cure for the wither and the pain it causes Iasrees. She has come up with a new concotion, but her guinea pig refuses to take it, declaring she doesn't want to participate in Srila's pointless experiments any more. Srila feels angry and alone. She decides to take the dose herself even though she has to go on duty and the concoction could affect her singing abilities. The remedy doesn't work. Profoundly disappointed, Srila despairs of finding a cure and considers abandoning her quest. Maybe, all those years ago, when her mother told Srila she was too young to help fight the wither what her mother meant was that Srila wasn't good enough... Srila thinks of other remedies and discards the ideas as hopeless. No one else has ever found success with medicines from Paoqei.  She must look elsewhere. She decides to disobey the ban the council put on her to keep her from doing just that.

So, that's what I'm doing now, transmuting all those hazy islands of scattered thought into solid tentpoles to hold up my fiction. Vowing not to wig out and just start writing again before I'm really ready. Doubting I'll have the willpower to resist the lure of the rabbit.

The time I've spent trying to wrap my head around story structure and fighting my aversion to planning out goals and stakes makes it seem like I've settled on a cumbersome system.  The length of this post rambling about the whole journey doesn't help.

Fom here on out, though, apart from the time consuming "prewriting" of finalizing each scene and sequel, if I apply what I've learned to other works, I should be able to plot faster and, more importantly, better.
Tags: click it, solitary headgames, that thing called writing, updates, witherwilds
Subscribe