Stupid question, but how did it get to be October already? Seriously.

This year, the whole family is in on the inking fun of Inktober. The kids get in and get it done and then move on to other things like watercolors, crafting, etc.  I will share some of their stuff at a later date. J is drawing, too, using the challenge as an opportunity to work on his knife designs.
What am I doing?

Long, long ago, I had an idea for a story featuring a young girl named Rook. Seeing as how it was in 2004-2005, and I was already writing on another book, I shelved the idea. Over the years, teensy, tiny tidbits from the the story and world have occurred to me. I don't think I am ready to start writing it yet, even though I have been toying with the idea of taking a stab at it for NaNo. Therefore, I have decided to use it as my "theme" for Inktober. I have no intention of it being an illustrated story, but I do think I can capture the mood of it in ink, and that might set the story to percolating even more strongly.

So, in true me style, I am trying out some new supplies like Yupo paper to achieve this (and copious amounts of India ink, which--OOPS!--I don't have any more of! Thank the Lord for the Internet). Should be lots of fun. And I shall learn a lot along the way. Because when you are starting from zero, you can only accrue knowledge, right?

The Yupo paper is quite small, as this in-progress photo shows with my micron pens for scale: 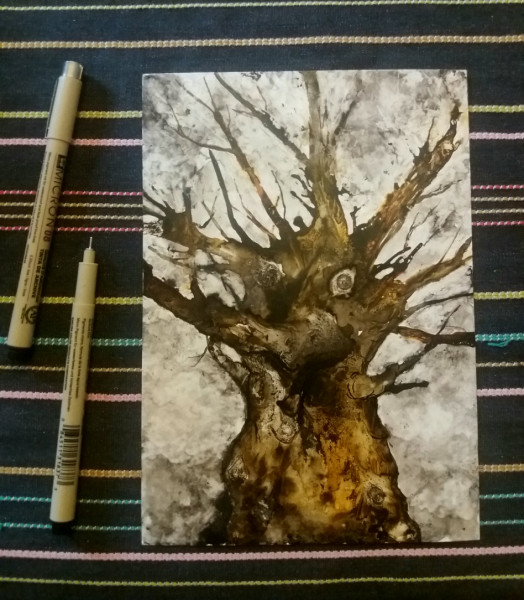 I might do scans for better image quality as I go along, but I didn't want to wait for the ink to dry this time, so phone photo it is. I think it looks better in real life. :P
Scanned copy: 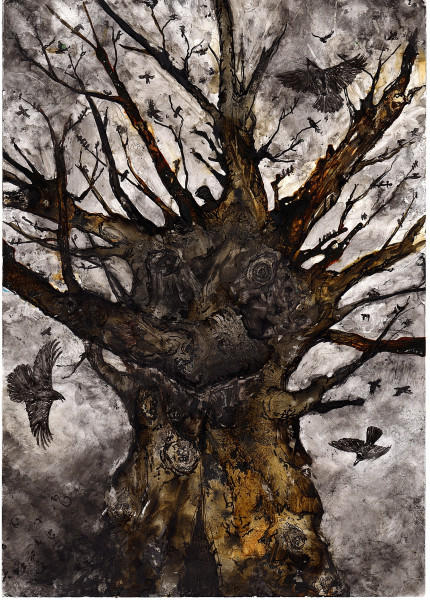 "The Rookery"
How about you? Doing Inktober this year?
Collapse