As you can guess from the subject line, Sprout is still crazy in love with dinosaurs (at this time in her young life she says she'll be a paleontologist when she grows up), so dinosaur fun it was.

A peek at the preparations and some party photos.

I made my first ever pinata, a triceratops that I failed to get a picture of before it was smashed to pieces. Huge Fail. Especially since it was finished days before the party. Have some production shots: 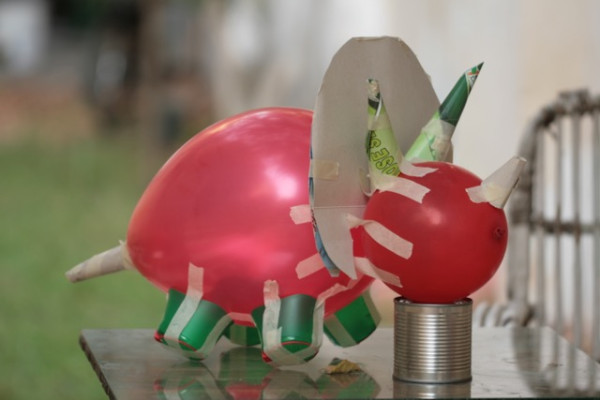 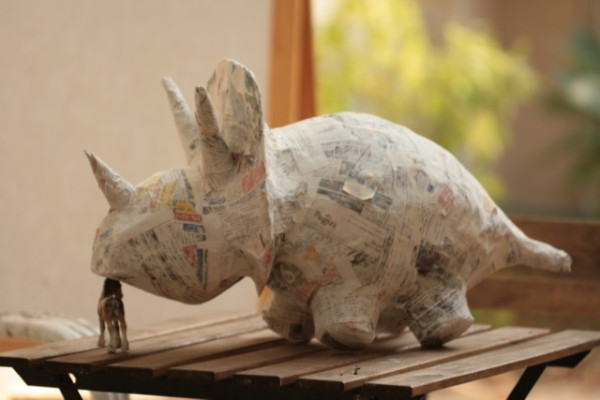 My mil tactfully said, "That's not a dinosaur. It's a rhinoceros." And then wisely--since she'll be the first to tell you she isn't really "up" on her animals, much less dinosaurs--added, "Or maybe not." LOL

OK, I lied. I pulled a stillshot of the finished pinata from the video of the kids smashing it, but it was filmed at night and doesn't do it justice. If I do say so myself. 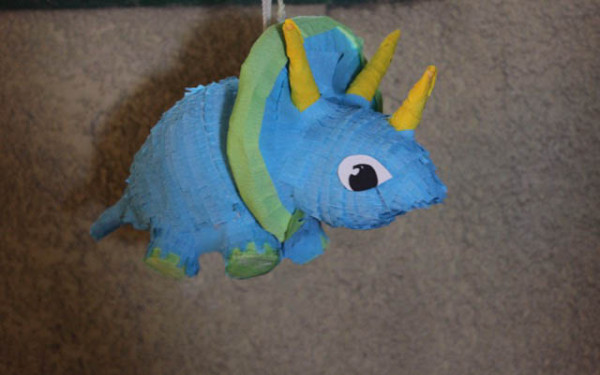 Out of salt dough, I made four dinosaur skeletons, one for each team of mini paleontologists to race to assemble. Here is part of the pterandon, drying: 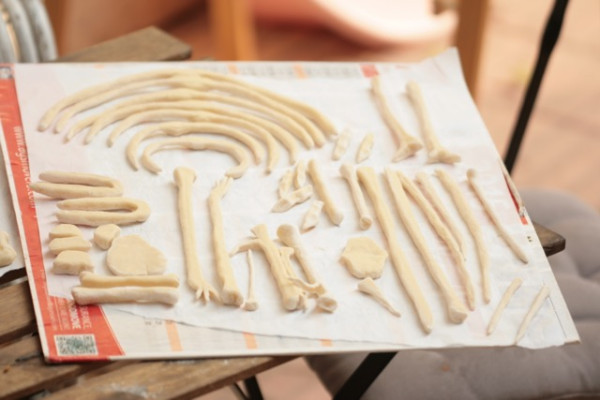 Each dino had 45-50 "bones"  and measured one meter long. That's a lot of salt dough. I assembled and photographed them so the kids would have a "cheat sheet."  I had to use it myself to double-check the spinosaurus. I would have loved to have the kids excavate the "fossils" and then put them together, but a) we don't have the room in our yard, and b) I didn't think the fossils would survive that. :P

Since this wasn't a surprise party, Sprout and Junebug got in on the decorations: 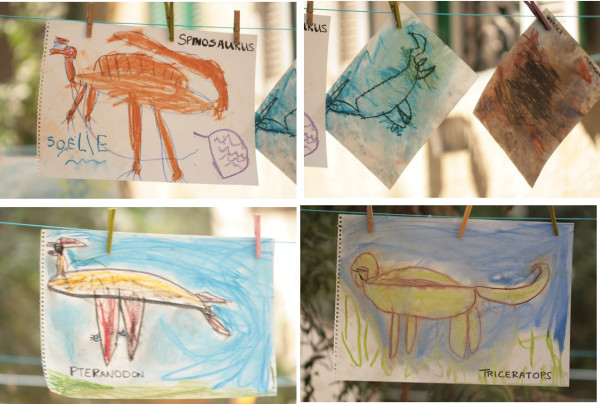 I got the idea for this cool banner off Pinterest: 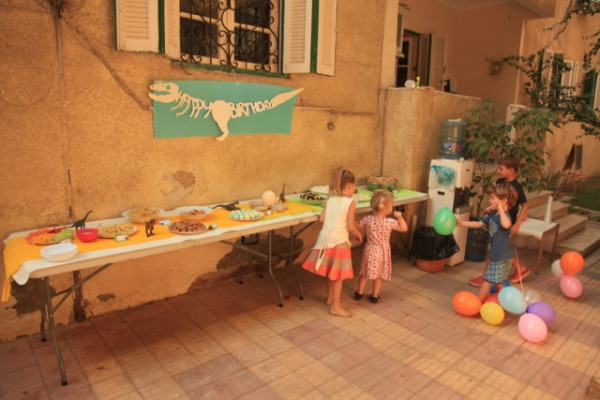 Instead of cutting out each letter, I drafted the whole on three large sheets of paper, which I taped together.

I made dino eggs out of salt dough and coffee grounds with a small (not as little as I wanted, actually) dinosaur figurine inside. I was going to make one for each kid, but Egypt is not the US where one can find any little trinket one wants, not even in the Egyptian Toys-R-Us. So the eggs, which looked very much like rocks, doubled as decor, holding up an ostrich egg as a centerpiece. You can barely see them in the photo above, but I'll post another. There where just enough eggs that I could give them out to the members of the winning team in the Great Dino Games. But we played those after snacks, which were: 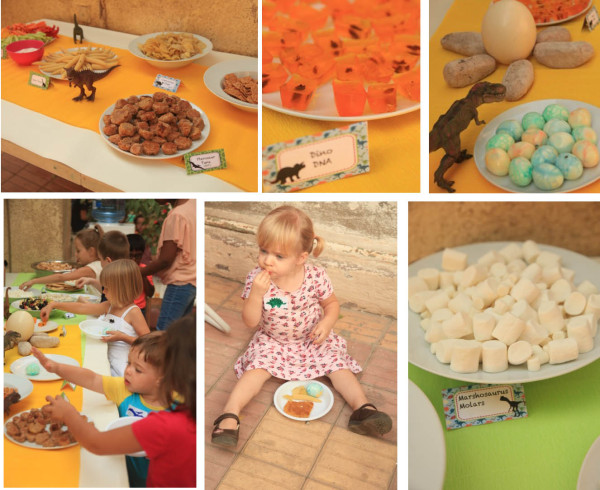 I jazzed up some free food tent printouts with free clipart.
After snacks, the kids divided up into their herds: Triceratops, Stegosauruses, Spinosauruses, and Pteranodons.

Then they played Dino Stomp, which consisted of a timed race to pop all the balloons tied to J's ankles and wrists while he did his best to escape them. Next was Pterosaur fishing, at which the Pteranodon team exceled, clenching their victory of the games since they were able to catch the "special" fish, worth ten points. :P Then came the fossil puzzles, and finally the naked egg spoon race. That didn't last long, as you can imagine with small children, but it was OK because it was getting late and time for cake. 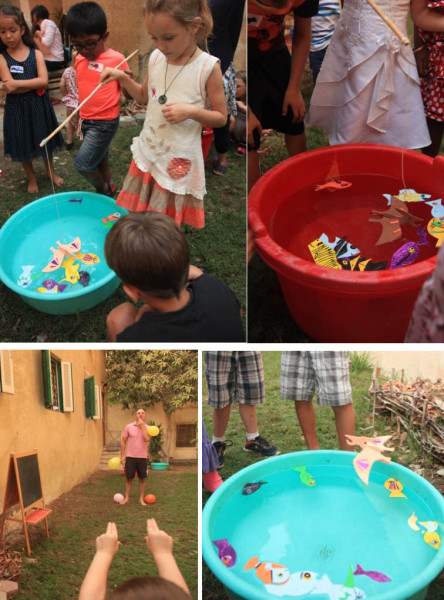 See how narrow our yard is: 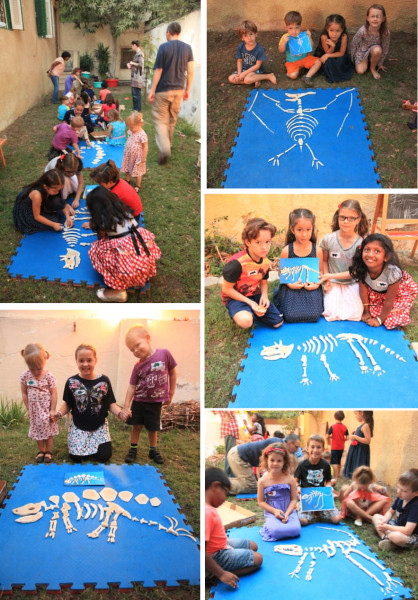 I was all over the place with the party and didn't take any of the photos. So my absolute biggest fail was not getting a photo of the cake. It was a volcano, four layers high to get the cone shape. It had both chocolate and red velvet layers and was covered in icing, then ganache, and drizzled with red and yellow icing to simulate lava flows. It was a pinata cake; the top three layers were hollowed out to make the volcano chimney and filled with candy. It had fake palm trees and sparklers, and it was pretty awesome, even if prior to being decorated it it looked like a steaming pile of dino poo. LOL
Again I tried to pull photos from the video, but yeah...just not the same. 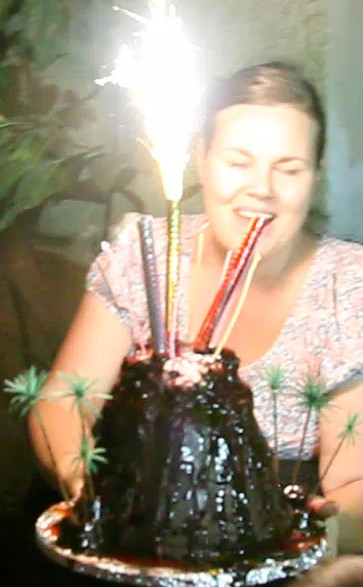 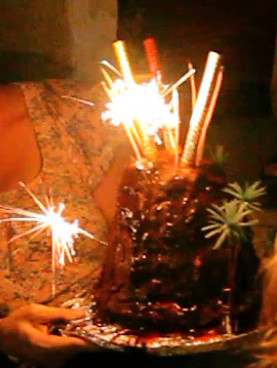