For the second time, I've made a galette des rois (kings' cake) for Epiphany (which is also the Coptic Christmas Eve); acutally I made two.  Last year, my puff pastry puffed only moderately; this year, lots of puff--oh glorious flaky layers!*--but both of the galettes leaked, losing quite a bit of filling. Thankfully, I had put in a lot of frangipane. Another thing for me to be thankful for is that these galettes des rois can be cooked at very high temperatures, seeing as how my oven doesn't like to cook anything under 200 degrees C / 400 F. 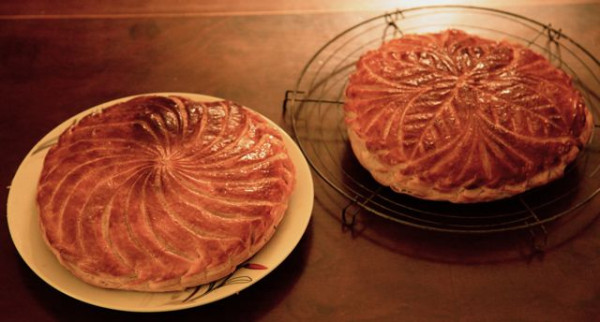 Next year will be my year!  But, I just might make another one in a couple of days to see if I can get it right. I want to eat more! I want to make more pretty designs on the top.

We invited some French friends over to enjoy them with us, and their youngest daughter got la fève. I had made a crown for her but forgot to take a picture.  If you go to this Wikipedia page and scroll down to the section about the French king cake, it'll tell you about the tradition.

For this year or next, for my own record, here is a list of sites and videos I used to study the recipe and techniques:

Recette technique de la pâte feuilletée par Chef Philippe (video and recipe; butter trick since "beurre de tourage" is not readily availabe to lay bakers: Put softened butter on baking paper or plastic wrap and, using a rolling pin, flatten it into a 20X20 cm square, about 1.5 cm thick.  Put back in fridge to firm up a bit. Basically like this [video doesn't have sound])

Recette façon grand chef : la galette des rois (YouTube video about how to put the galette together and make the frangipane. This link writes out the recipe for the frangipane and provides slightly different instructions than the one I usually use for the puff pastry, adding 100 grams of melted butter to the detrempe. Might make it too rich for J. :P)

Some notes:
- Make sure to work the détrempe well so as not to have lumps in it that will cause the dough to crack upon rolling it out (yeah, learned that one the hard way).
- Re frangipane: Equal parts butter/sugar/almond powder didn't work for me. Way too sweet. Scale back on the sugar. Did not use a recipe that called for a thickener like cornstarch and the frangipane was fine. For two cakes, I did 250 each of b/s/ap and four eggs and had plenty left over.
- Do NOT crowd the border with filling; otherwise, a good seal will be impossible.
- Start the pastry the eve (at least) of baking day to save time and headaches. Dough keeps 2-3 days in fridge.
- By following the two-washes-with-egg procedure in the "grand chef" video, my galettes were shiny and did not need to be brushed with syrup. I brushed them anyhow, but maybe it would be better not to to cut back on sweetness

* The angle doesn't do the cakes justice, making them look flatter than they were. :P