Despite bans on the importation and use of tuk-tuks in Egypt (Cairo?), the little buggers persist and are being driven in streets where they were (are?) forbidden, i.e. right in front of our apartment building.

I don't have anything against them per se, except their drivers are typically Egyptian, thinking they own the world roads; and whether because it is some unspoken law or because the drivers tend to be young boys/teens, the tuk-tuks are equipped with monster speakers of dubious quality that blare out obnoxious music or "other" sounds.

Your glimpse today comes to you courtesy of a tuk-tuk with a noise of the obnoxious "other" category. 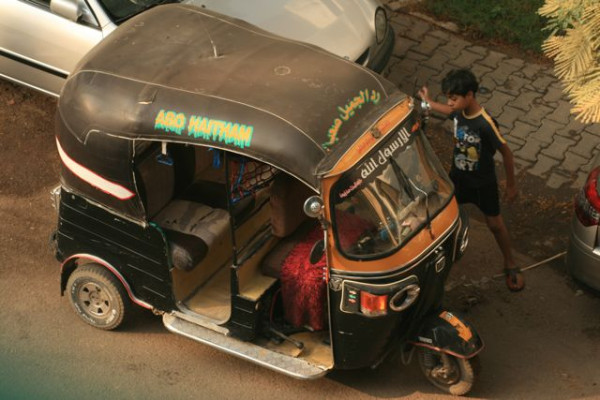 As this guy was driving along, his speakers kept playing, at full-blast no less, a service message the likes of which you hear  at an airport.  Given the aforementioned dubious quality, despite the volume, I was unable to make out the words, but this should give you an idea of the sound and rhythm:  "Bing bing bing, flight 432 now boarding at gate 12; bing bing bing."

And of course, he "drove along" s.e.v.e.r.a.l. times and stopped to chat with the bawab of the facing building.

_________
* Without googling, who knows what song this comes from? :P It's been playing on repeat in my mind ever since Sprout watched Aladdin the other day.
Collapse