The Sprout said her first independent sentence on Wednesday. At breakfast, with a little wind-up chick in one hand and a cup of milk in the other, she proclaimed: "Poussin drink milk." Poussin, I'm sure you guessed, is "chick" in French. So, while she is mixing her languages and hasn't quite grasped the conjugation thing, she is firmly on the path to figuring out how to get her way more efficiently. :P

Some things don't need full sentences, like when she says "chapeau" and puts her napkin on her head. 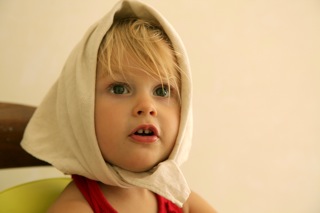 As I mentioned in my last post, I've been doing a lot in terms of rethinking certain story aspects. Today, after reading a couple of blog entries, notably "Too Much of a Good Thing: Over Plotting Your Novel" by Janice Hardy, I decided I need to get rid of the 6th POV I introduced in Book 2. That is an ouchie realization since I've already written over 10K words from her POV. Yeah, sucks. But better to be hit upside the head with that particular 2X4 now rather than after writing all of book 2, or worse books 2 and 3.

The introduction of that POV will expand the scope of the story too much and take the plot wider, instead of deeper,* and deeper is where I need to be going.  That extra POV also takes some pressure off one of my other MCs, and that is BAD.  I now understand why, all of the sudden, I started flailing around so much with his arc when that arc was clear enough before the "brilliant" idea of including POV #6 swamped my brain.

I'm also reading the Story Structure Series on Storyfix and getting ideas and much needed clarity on the 8(!) parts of the 3 (which is really FOUR--yeah, my brain hurts, too) Act Structure. Another site mentioned 8 parts, too, but said parts weren't labelled or described in a way I could get my head around. I couldn't figure out where that eighth part slotted into/expanded the 7 point plot structure that I already linked to.  I think I pretty much have a handle on it now, and I'm seeing things I instinctively did right and others than need tweaking to maximize impact for the reader.

More than that, I'm seeing the holes I left (deliberately, intending to flesh them out later) must be filled now because whatever I come up with should (dare I say must?) impact the story.  So, a lot more brainstorming for me.

Brainstorm, plotting, and all other planning must be set aside long enough for to come up with at least a snippet, which I'll be posting on Sunday.

frigg and I have decided to do Snippet Sunday on our LJs.  I'd love it if other creative types on my flist did the same.  I get pumped up reading about/seeing others' creativity at work. No obligation or pressure of course.

__________
* The "deeper not wider" is also from The Other Side of the Story, Janice Hardy's blog, which was advice from her agent Kristin Nelson.
Collapse