I must admit to feeling a bit hemmed in here in Saint Jean de Luz. Yes, the ocean is just behind the next hill over; yes, Larrun and Les Trois Courrones/Peñas de Aya loom on the horizon, their green silhouettes beckoning; but living in town, surrounded by houses, apartments, kept to sidewalks by fences and walls and declarations of "Private Property"...well, my wildcrafting soul has been fluttering anxiously.

Until the other day, the other happy day, when I saw a couple walking alongside the road, both of them with a green bouquet in hand, scrutinizing the hedgerow as they ambled downhill to the beach. I was driving in the opposite direction, so I didn't get a good look at what they had, but my first thought was "wild asparagus!"

As soon as I could, I pulled off the road and took a look at a small, undeveloped plot of land. I saw a creeping plant, tendrils winding around grass stalks, weed skeletons, fallen branches, themselves, anything that would help in their quest toward the sun.  Ah ha!  The tips of those tendrils were what they were gathering. They did smell a bit like asparagus when I snapped them off, so I was convinced they were indeed some wild variety, not just escaped "cultivated" plants.  Chuffed with my discovery, I continued on my way and happened upon a tiny bit of woodland just beside the road. My lucky day indeed. An accessible wild haven in the midst of town!

I parked the car, and Soëlie and I went a-gathering... 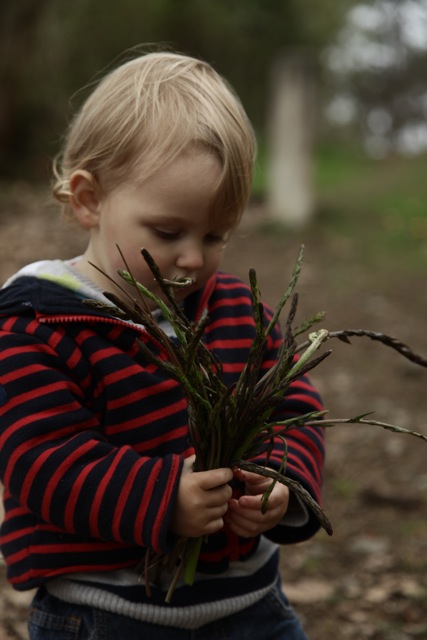 ( Collapse )
...as well as dandelion leaves for salad.  Did you know that in France, there is a Society of Dandelion (Product) Tasters?  There is.  How about those costumes?

The Black Bryony was just fine in the egg salad I made with the Easter eggs, but it will never take the place of milkweed in my wildcrafting heart!
_______________
* Other colorful names for Black Bryony in French are: Devil's Grape, The Seal of Notre Dame, and battered women's herb, the last due to its bruise-healing properties.
Collapse