I'm always saying that I'm going to post recipes and then don't get around to it. Not this time, I decided.

The problem is that I usually want to do a fancy photo post, and I don't always feel like getting the camera out while I'm cooking. First, food stylist I am not. Second, baby underfoot. Third, lighting and tidy kitchen issues. Julien believes in the clean as you go method, whereas the kitchen looks like a bombsite as I go. :P

Still, I gave it a shot last night with these pots de crème à la lavande, not getting enough photos for a step-by-step recipe but just a few to put you in the mood. Lavender is in bloom and I can't walk by a shrub of it without wanting to eat crème à la lavande. I do not give into the temptation on a regular basis because a) just wait until you see the amount of cream in these puppies, b) I read that pregnant and nursing women should avoid lavender (the article didn't state WHY and because I know the "dosage" I get from this dessert is minimal, I choose to still eat it. Just FYI). 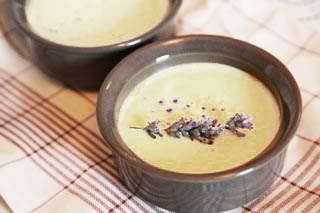 Ingredients:
25 cl or grams (1 c) milk (We use whole milk, fresh from the farm)
1 T dried lavender buds (We have used fresh flowers, gathered in the courtyard of our first apartment. Ah, those newlywed days)
4 egg yolks
40 g (about 1/4 cup minus 1 T) caster sugar
330 g cream (You can use whipping cream, I would imagine. We use cream fresh from the farm, which is very thick--the ingredient called for in the French recipe is "liquid cream"--but as the dairy farmer pointed out, leave cream at room temperature and it will liquefy)

Julien's variation (pictured above):  Add a couple of chunks of dark chocolate to the ramekins before the cream for a surprise OR grate chocolate on the top.  Chocolate and lavender get along famously.
__________________

Bring the milk to boil in a saucepan, then add dried lavender flowers, cover, remove from heat,  and let steep for 10 minutes.

Vigorously whisk egg yolks and caster sugar until the mixture is pale and thick. Fold in the cream. Pass milk through a filter to remove lavender flowers as you add it the other ingredients.

Place parchment paper, paper towels, or a dishcloth at the bottom of a dutch oven (in French, the recipe calls for a dutch oven, but we use a casserole dish, too, and it turns out fine). Place 4 ramekins on the paper/towel (We've found that it makes closer to six ramekins) and fill them with the cream. Pour water into the dutch oven, halfway up the ramekins. Put dutch oven on the hob and bring water to a simmer. Cover and bake in oven for 30 minutes.

Chill at least 4 hours before serving.